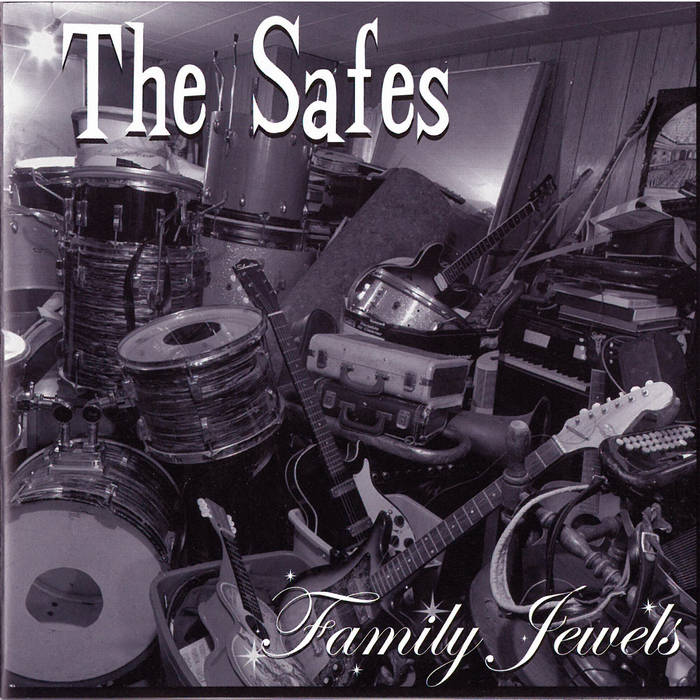 The Safes open a treasure trove of gems with their debut compact disc “Family Jewels” and personally deliver the goods. Setting the story straight, learning from your mistakes, exposing corruption, and rejoicing in peace of mind all bring the satisfaction found in listening to The Safes first full-player. Suffering and revenge, deception and truth, melancholy and joy, all of these feelings burn like fire within the tracks of “Family Jewels”. It exudes the furious glory of the underdog disemboweling its opposition, while owning up to its own faults- a record with enough balls to wear its heart on its sleeve. Who are The Safes? Well actually, they are the brothers O'Malley (Frankie, Michael, Patrick, & Sean) from Chicago and began playing together as The Safes in January 2003.

So far The Safes have toured throughout the US opening for such notable acts as The Datsuns, The Mooney Suzuki, The Makers, ? and the Mysterians, Gaza Strippers, Von Bondies, the Black Keys, The Fleshtones, The Cynics, and The Toasters, among others.

The Safes have also appeared on several compilation records in both the United States and Europe with the likes of the Figgs, Young Fresh Fellows, The Rondelles, Dirt Bike Annie, Junior Varsity…

“The Safes are far from kidding themselves when it comes to what they envision in their future. With a debut as solid as Family Jewels there’s no telling how far these brothers are going to go. We’ll just have to wait and see." -- Sponic

“Smartly dressed Chicago rockers The Safes bring tart hip action to the scene with pop sensibilities and raw enthusiasm. Manned by four brothers (Frankie, Michael, Patrick, & Sean), the band chews up and spits out punkified-rock with snotty vocals and serious hooks. This family affair has seen lots of action since forming, touring extensively around Midwest clubs with like-minded hoodlums and taking the act as far away as Ireland. There are real tunes at the heart of these rockers, though they’ve grown gutsier and louder with time. Rock starved local don’t need to look much further than The Safes, who have been rattling teeth and dance floors for some time. Get hip, get shakin.” --AOL Digital City

“The jams kicked out by these brothers are equal parts melody & muscle, and they briskly reenergize the Cheap Trick aesthetic for a new generation. This band is all about fun, loud, high-energy rock that’s played with the primitive driving force of punk. These boys understand the value of the all-important pop hook, and they also recognize the timeless appeal of straight-ahead rock n’ roll fervor. They play exciting music for cool people. Present here is the holy trinity of pop-rock virtues: strong songwriting, good production, and raw, gutsy musicianship. FAMILY JEWELS is simply one of the best pop albums you’ll hear all year.” --NowWave Magazine

”So here you have it; an American band that reclaims garage rock in the gritty way it should be done rather than the way those damn culture-less Swedes have been known to do. The Safes prove time and time again that rock comes straight from the heart.” --Left of the Dial

“Some of the best pure pop for now people is being created by a bunch of brothers (literally) from Chicago. With the release of its new cd “Family Jewels”, Windy City boys THE SAFES are making a new name for its brand of hard driving melodies amongst the world-wide circuit of power-pop aficionados.”
--ArtVoice

“The Safes approach pop songs like Cheap Trick and deliver them like The Clash (circa ’77, in both cases). The Safes uncork one hit after another and they never play it by the book, making for a supremely good disc.” --GoMetric

“The Safes jangle, they pop, they harmonize, they hook, they strike your chest, they reel you in and they rock you back down. The Safes use their immense love and understanding of pop and rock’n’ roll to give us 11 rocking, swaying, loving, breathtaking, awe-inspiring, pop hits.” --Vinyl-a-go-go

“Family Jewels” is an incredibly well-paced and extremely well-executed first record. We’ll stay tuned to see if the Safes keep their jewels locked up, safe and sound or if they cash them in on some cheap tickets to fame and glory."
--Indie Workshop